Continued with gDNA isolation from yesterday’s samples. Additionally, isolated gDNA from R51 01, but homogenized the tissue (using disposable 1.5mL mortar/pestle) in 0.5mL of DNAzol and topped off to 1.0mL. All 3 samples were gently pipetted up and down to further dissolve the tissue. For those samples that were subjected to Proteinase K digestion, I transferred 100uL of the solution to a new tube containing 1mL of DNAzol, [as described in the DNAzol protocol (see “Notes, #5” part of protocol)(https://www.mrcgene.com/dnazol.htm). Tubes were incubated 10mins @ RT.

The 260/280 ratios for all samples are great. Yields are significantly lower than I was expecting. However, for R51 11 and R51 01, only 100uL (1/5th) of the digestion was used as described in the protocol. I may recover the remainder of the R51 11 gDNA since remaining tissue could be a limiting factor. The homogenized sample had the highest yield (9.35ug), suggesting this may be a more efficient approach to obtaining gDNA (faster procedure and higher yields).

These results also demonstrate that gDNA can be successfully isolated from samples stored in RNA Later (gel pending).

Isolated the remainder of the gDNA from R51 11 and R51 01. Added an additional 0.5mL of DNAzol to each tube and pipetted up and down to further dissolve the remaining tissue. Then, proceeded as described above. Samples were resuspended in 200uL of 8mM NaOH with 2.02uL of 1M HEPES added.

Both samples have great yields and excellent 260/280 ratios. Digestion, combined with gentle pipetting to disrupt undigested tissue, appears to lead to higher yields. However, the process is more time consuming than just basic, physical homogenization of tissue. 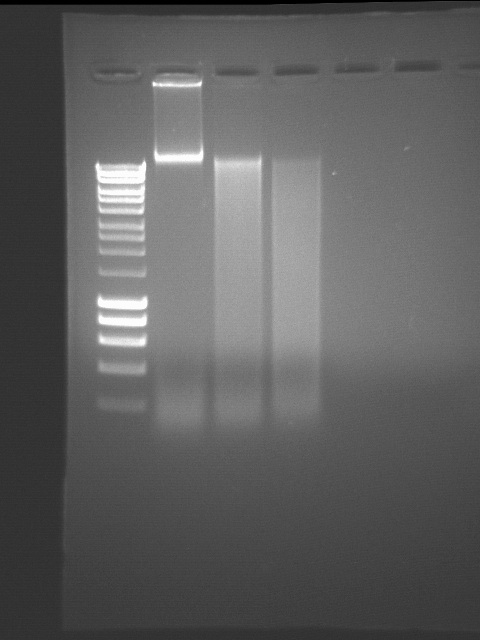 The R51 11 sample looks perfect. The other two samples however, appear degraded, with the homogenized sample looking the worst. Interestingly, those are both from the same source tissue, possibly suggesting that the DNA in this particular gill sample is actually degraded and is independent of the preparation, since the R51 11 (Lane 2) and R51 01 (Lane 3) were prepared simultaneously and in the same way. The gel also seems to show that physically homogenizing the sample leads to greater degradation than performing the Proteinase K digestion.