Performed nested RACE PCR on the RACE PCR products generated on 20110722 using the following nested primers: PGS2_ngspRACE_5’ (SR ID: 1350) and PGS2_ngspRACE_3’ (SR ID: 1349). Removed 2uL from each of the primary PCR reactions and brought up to 100uL in tricine EDTA (supplied in the Clontech SMARTer RACE cDNA Amplification Kit). Performed the nested RACE PCR according to the Clontech manual. Briefly, this is the same as the primary RACE PCR reaction, but using 5uL of the diluted primary PCR product and 1uL of the Nested Universal Primer (instead of 5uL of the 10X Universal Primer Mix). Master mix calcs and set up are here. Cycling params followed “Program 2” of the Clontech protocol, modified for nested primers, and are as follows: 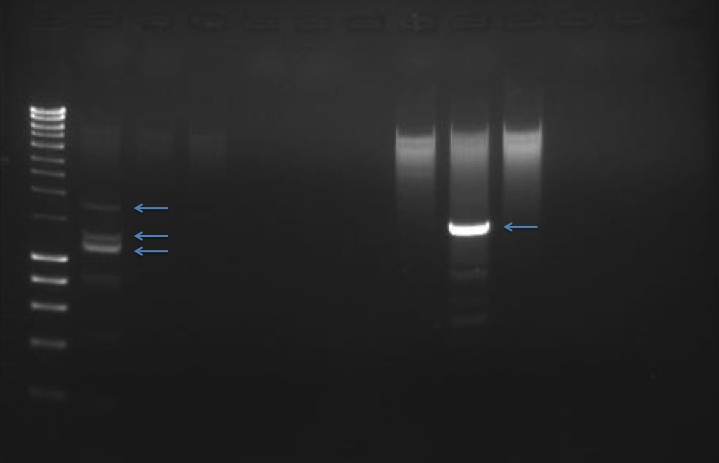 First of all, we see the appropriate response of each primer only producing amplicons in their respective libraries (i.e. 5’ primer only works in 5’ RACE library). This simply confirms that the primers were designed correctly. Secondly, our negative controls are clean. Thirdly, we get distinct bands from both primers. The bands marked with blue arrows in the image above were excised and purified using Ultrafree DA spin columns (Millipore). These products will be used for cloning and eventual sequencing.