Previously isolated gDNA from these tissues on 20150828. However, found out after the isolations that BGI needs >73μg of gDNA for the genome sequencing project, which is significantly more than I obtained previously.

Isolated gDNA from Panopea generosa (geoduck) adductor muscle & foot samples collected by Brent & Steven on 20150811 using the DNAzol (Molecular Research Center) according to the manufacturer’s protocol, with the following adjustments:

Spec’d on Roberts Lab NanoDrop1000 (ThermoFisher) and stored temporarily at 4C to avoid freeze-thawing before sending off for sequencing next week. 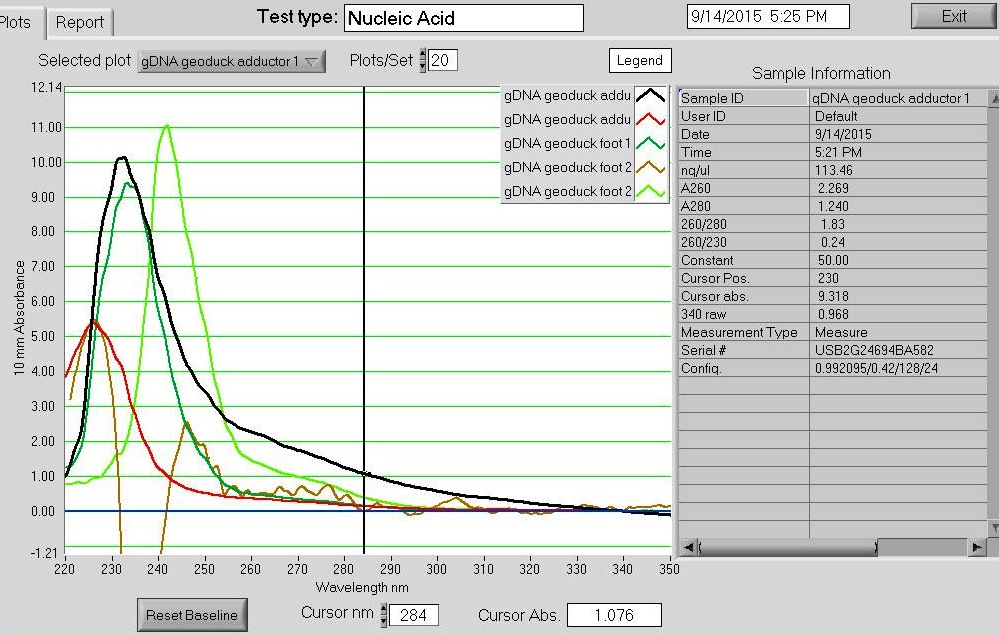 Overall, the 260/280 ratios look pretty good, but the 260/230 ratios are just trash. As can be seen in the plots above, there is clearly significant absorbance in the 230 - 250nm, suggesting some contaminant carryover (phenol/salt). Oddly, the side-by-side isolations from two different collections of the same tissue type yielded drastically different quantities of gDNA than each other.

Total yield from this isolation is still far below the minimum quantity of gDNA needed for the sequencing project. Will need to perform another round of gDNA isolation.